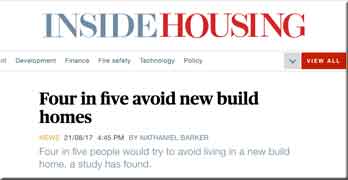 Research commissioned by bridging lender Market Financial Solutions (MFS) revealed that 81% of adults would rather live in an older home than a new build, Inside Housing reports.

And 79% of those responding to the survey said the government prioritise refurbishment of run-down existing homes to boost housing supply.

The majority of the study’s 2,000 respondents – or 60% – felt there are too many poorly built and unattractive new homes emerging, while 23% said they would only consider buying a new build as a buy-to-let investment.

There is now ever growing awareness that national housebuilders set out to rip off their customers with onerous lease terms, maximising the value of the freehold which could then be sold on to anonymous, murky speculators, often based offshore.

Issues of build quality appear in the survey.

In blocks of flats, housebuilders routinely frustrate leaseholders from taking control of the sites – where they are even permitted to do so via residents’ management companies – until they are safely out of the two-year warranty period. Another eight years is covered by the NHBC or Premier Guarantee warranty.

Invariably, housebuilders sell the management to blocks of flats to one of the larger property management companies, whose task is to keep the residents quiet and disempowered.

Countrywide ‘ripping off’ leaseholders, MP tells Commons. And it is given the boot by Bovis Homes

Daily Mail attacks housebuilder bosses helping themselves to “mate’s-rates homes”
Next Post: Why are National Trust leaseholders in uproar over ‘modern ground rents’?