Donate
You are here: Home / Latest News / One article among many yesterday … from LKP 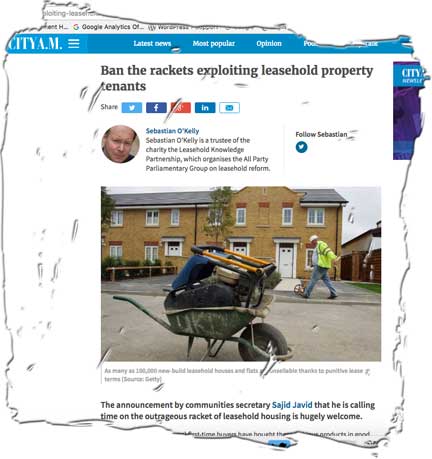 Yesterday was one of the most frantic we have ever experienced at LKP, with both trustees and all MP patrons packing into TV and radio studies at BBC, ITV and Sky. And Justin Madders MP in demand in Liverpool … More on the media coverage later.

But in snatches of time, I wrote this for the City freesheet CityAM. (A first for me, and you write for the pleasure it, apparently, there being no fee at all. As I told the features editor, that will only give her proprietor ideas …)

The announcement by communities secretary Sajid Javid that he is calling time on the outrageous racket of leasehold housing is hugely welcome.

Thousands of (mainly young) first-time buyers have bought these dubious products in good faith from housing giants. But they have been royally cheated.

Leasehold, which exists in England and Wales – and nowhere else in the world – has been a racket for years.

Read more: Javid to crack down on leasehold abuse with “radical” proposals

It works like this: build a block of flats, and sell them with tenancies (leases) rather than the freehold title. Then – the cherry on the cake – sell the freehold too, usually to another party. Housebuilders earn between £300m and £500m a year from this practice, according to our research.

Since the 2002 Commonhold and Leasehold Reform Act, builders could sell flats commonhold if they wanted to, on the same basis as continental Europe, Australasia and North America.

But most tend not to do so, because they make so much money selling leasehold tenancies and freeholds separately.

The outcome is that now as many as 100,000 new-build leasehold houses and flats are unsellable thanks to punitive lease terms. Ground rents – which are for no service whatsoever – have been set at exorbitant rates: £295 per year doubling every ten years in the case of Taylor Wimpey.

These ground rents may have escaped the headlines, but they will also be examined in Javid’s review. And rightly so. Thousands of new-build London flats are sold with appalling ground rent terms. Take The Mount at Mill Hill, for example, where Countryside Properties has been selling flats with doubling ground rents as recently as this spring. (It has apparently since discontinued the practice.)

Now financial services providers have decided they simply will not lend on these assets. Nationwide won’t lend on properties with ground rents above 0.1 per cent, or with doubling ground rents of any amount. Santander and Yorkshire Building Society have publicly stated the same. Barclays won’t lend on leasehold houses at all.

The result? 100,000 owners of new-build houses and flats have found their properties are now estimated to be entirely unsellable.

Thanks to Javid, this nonsense is now coming to an end.

Although there will be a formal review, it is difficult to see how the housebuilders are going to talk their way out of this. Indeed, it is questionable how much of the dubious leasehold world will survive under scrutiny of this sort.

Housebuilders will make much of being unable to sell houses as anything but leasehold when they do not own the land itself. But in the vast majority of all cases, they could buy the land if they wanted.

Take Worsely Fold in Salford, Greater Manchester. Here, Bloor Homes and Redrow are building leasehold houses on land that is owned by commercial property giant Peel Holdings. As the housebuilders do not own the land, they say the houses have to be leasehold. This is a nonsense. All three are large property companies based in the North West involved in a joint venture. If they wanted to sell the properties freehold, they could easily do so.

In many instances, the game is stacked against owners who wish to buy the freehold.

Take the interesting case of the freehold of Neo Bankside, the building beside the Tate Modern (indeed, the building where gallery visitors can gawp through the residents’ windows, which is now the subject of a court action). The freehold – owned by the dukes of Westminster and Buccleuch, and Native Land – is temporarily for sale to the residents at £4.8m. The money is not at issue, in a site where annual service charges can top £18,500 a year. But 50 per cent plus one of the 280 leaseholders have to agree to the purchase.

That is a logistical nightmare, particularly over July and August, and especially considering 60 per cent of the leasehold owners live abroad. One might almost believe the sellers have another buyer lined up. If so, the buyer will pay considerably more than £4.8m.

Freeholds come with other revenues: service charges, insurance, major works contracts and the rest. A residential freehold really is a brilliant asset. The leasehold houses with doubling ground rents were paying the freeholders an annual return of eight per cent. No wonder housebuilders are so attached to leasehold.

But for buyers, leasehold is too often an absurdly complex form of tenure. Let’s hope Javid brings clarity and simplicity to this unfortunate sector.