Twelve months ago the leaseholders in Citiscape Croydon were in a very dark place. They were being taken to the Tribunal by FirstPort to prove that they should be liable for cladding costs, which were estimated at over £2 million – over £20,000 per flat.

The leaseholders had been given poor advice by LEASE on how to defend their position. They had no formally recognised residents group and the residents group would hold its first ever residents meeting just days before they were due at their Tribunal hearing. 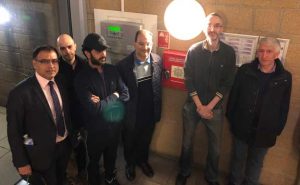 Despite the government’s repeated use of the term “building owner” this was never a case where the freeholder would pay, as the site has a “tripartite” lease which means: FirstPort were responsible for maintaining the building but did not own it; the Tchenguiz Group owned the freehold but had no right to maintain the building; and the leaseholders are responsible for the costs which had to be paid to both FirstPort and the Tchenhuiz Group. The fact that the freeholder was not even named in the case, we hoped would help the officials understand that “building owner” is a very silly term.

The leaseholders’ darkest days came when the Tribunal decision was announced and as expected the leaseholders had lost. The lease made them liable to pay regardless of pious phrases from government Ministers about “building owners” and their “moral” duties.

The distress to the leaseholders was enormous. Unfortunately, some of those leaseholders even turned on their resident’s committee for taking on the fight.

Unbeknown to the leaseholders a white knight was sitting out of view watching and waiting.

Despite the building being beyond its warranty period, the original developer Barratt Homes decided to make an offer to pay for the cladding costs.

Work on the project has developed throughout 2018. On 7th January 2019, the leaseholders reach the end of their s20 consultation period for the external works redecorations, that will now go hand in hand with the cladding replacement.

So now the leaseholders at Citiscape go into 2019 with three presents.

LKP sends its congratulations to Barratt, FirstPort and the residents committee at Citiscape for helping to make 2019 a happy new year.

The festive spirit has not just landed at Citiscape. After months of saying no Ballymore wrote to the leaseholder’s at New Providence Wharf in Docklands on 21st December to explain:

“We will also be arranging a meeting in January, to present the details of the offer of an interest-free loan, in addition to a financial contribution from Ballymore. The terms and conditions, as well as the level of Ballymore’s contribution, will be confirmed at a general meeting on Thursday 10th January”

The Ballymore site was completed in 2004 so again well beyond the warranty period.

Let’s hope it’s more than just a few sites where cladding gets resolved and that we don’t have to spend another year with government hoping for Santa’s help.

Tribunal to rule on whether West India Quay leaseholders are subbing the energy costs of the hotel below
Next Post: Farewell to newbuild leasehold houses?