Described by Sky as a “PR consultant” and “housing expert” – although he has no track record as an independent commentator – he said that the doubling ground rent scandal arose because housebuilders beset with onerous terms from local authorities needed a “bit more cash”.

He added the observation that no one “held a gun to the head” of buyers of leasehold properties.

But he did believe – repeating the housebuilders’ get-out – that conveyancing solicitors had responsibility for not informing their clients of the onerous lease terms.

He seemed to believe this issue is being considered by the Law Commission, which it isn’t: it is examining lease extensions; enfranchisement; and commonhold.

LKP is aware of class actions in preparation against a number of the developer-recommended law firms who raised no issues with their clients about properties with doubling ground rents which are now unsellable.

LKP has suggested to Sky that it debate these issues with Mr Teacher. 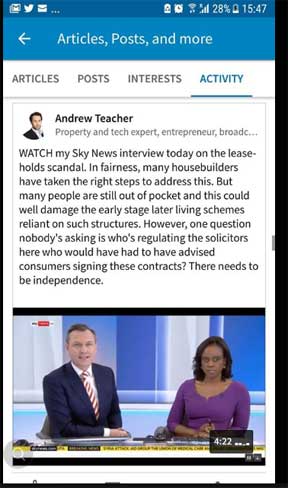