Donate
You are here: Home / Commonhold / Spire View, in Pickering, shows a commonhold future with no leases at all, says Sunday Times 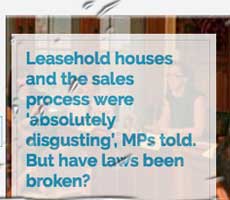 Just before Sajid Javid’s ban on leasehold houses and pledge to reduce ground rents to “as low as zero”, commonhold tenure – on the statute book since 2002 – has raced back onto the housing agenda.

The issue is now up for consultation.

The Sunday Times today reports how Spire View in Pickering, North Yorkshire, could be the exemplar of how to do away with leasehold tenure and replace it with a form of proper ownership which is how the rest of the world organises flats.

It would be disastrous for government – and provoke loud protest from the 100,000 stuck in unsellable leasehold properties – for it to consult solely with the trade bodies and professionals who are habitually described as “stakeholders”, but who in fact depend, without exception, on the remittancies of leaseholders for a living.

The consultation Sajid Javid has launched needs to hear from people like LKP trustee Martin Boyd, the chairman of a prime London site of 260 flats and many other chairman. It cannot be left to those who failed to warn ministers of the leasehold housing and doubling ground rent scandal FOR YEARS, to set the remit of this consultation.

The article in the Sunday Times (below) was by LKP trustee Sebastian O’Kelly:

Ripped-off leaseholders, your saviour is waiting in the wings

Pickering is an improbable place to find what could be the key to solving the leasehold housing scandal, which last week prompted the pledge of a government clampdown. The North Yorkshire market town is home to Spire View, a development of 16 houses and flats nestling beside a church.

Pickering is an improbable place to find what could be the key to solving the leasehold housing scandal, which last week prompted the pledge of a government clampdown.

The North Yorkshire market town is home to Spire View, a development of 16 houses and flats nestling beside a church.

As it happens, the scheme is well constructed and nicely designed, with the properties set around communal gardens and a pool. The main point here, though, is the manner in which the homes are owned: they are neither leasehold nor freehold, but commonhold.

That means the owners have full security of tenure and share ownership of the paths, gardens and pool, splitting the cost of their upkeep. They are as much full owners as people with freehold houses.

Elsewhere in the world, such a set-up would be unremarkable.

But in England and Wales almost all flats — and a number of houses, too, in recent years — are sold under leasehold tenancy, with all the baleful, monetising opportunities and injustices that involves. (In Scotland, by contrast, the law is different and there are very few leasehold properties.)

Spire View is one of just 15 developments built with this form of tenure since it was introduced by the Commonhold and Leasehold Reform Act 2002.

Commonhold may be about to experience new prominence, however, following the government’s announcement of plans to end the exploitation of homebuyers.

Sajid Javid, the communities secretary, said the clampdown could include a ban on the sale of new-build leasehold homes and a requirement that ground rents on leasehold properties be set “as low as zero”.

The aim of the proposals, which are subject to an eight-week consultation, is to stop housebuilders, big and small, cheating customers by dreaming up leases with punitive ground-rent terms and other income streams.

The announcement came after a nine-month campaign by the Leasehold Knowledge Partnership — which I co-founded — against the twin scandals of leasehold houses and grossly inflated ground rents.

A particular concern, as highlighted by Money last week, is the people — as many as 100,000 — saddled with lease provisions that double the ground rent every 10 years. This can make their homes unmortgageable and potentially unsellable.

The problem is not confined to the unfortunate 100,000, however: my organisation has for years campaigned against a system — unique in the world — that is deeply flawed in theory and unjust in practice.

Ownership of, say, a large London block of flats is an extremely lucrative business, and ground rents are only the start of the money-making opportunities.

Residents may also, for example, have to pay for permission to sublet their homes or carry out minor improvements, or for a licence to reassign the lease when they sell. There may also be eyewatering commission charged on insurance for the block (half the cost, in some cases).

All because leaseholders are astonishingly disempowered. In law they are simply long-term tenants, rather than owners; even those who paid £140m for a flat in One Hyde Park, the luxury development in Knightsbridge.

Housebuilders knew a good thing when they saw it and began extending leasehold to new-build houses around the time of the 2007-8 credit squeeze, sneaking monetising clauses into the leases.

In effect, they were creating a generation of tenantry, such as Maria Edgeworth, author of the 18th-century novel Castle Rackrent, would recognise.

People thought they were buying a home; in fact, they had inadvertently agreed to fund a sophisticated investment asset at their own expense, with the freehold of their property often owned by offshore interests.

It is mainly first-time buyers who have suffered, but also wider society, as taxpayers fund 20% of the purchases through the Help to Buy mortgage scheme.

Will Javid’s announcement help homeowners? Almost certainly, yes. During the consultation, the murky world of residential leasehold will be scrutinised for the first time since the 1990s.

So how will it bear up? First, let’s consider ground rents. They don’t pay for the maintenance of a building, and they are not a rent for the land on which it stands. They are a feudal relic, a kind of tax on the disempowered for no services whatsoever.

Javid’s comment about ground rents “as low as zero” excited us even more than the prospect of a ban on leasehold houses.

The courts already issue statutory lease extensions as of right where the ground rent is minimal (a “peppercorn”, in chartered surveyor speak). So how is it that housebuilders can impose ground rents with rapidly escalating terms?

The government wants to make ground rents “fair”, but existing law has already decided what fair is: zero.

Then there is lease forfeiture, freeholders’ nuclear weapon. In disputes over payments, it is routine to warn leaseholders of this penalty, and the courts grant forfeiture about 65 times a year. When this happens, the leaseholder loses the lease on their home, as well as the capital and any loans secured against it. They lose the lot; there is no comparison to repossession of a freehold home. The asset is simply given back to the freeholder.

The Law Commission called in 2006 for an end to this potential cash windfall but nothing has been done.

So why may commonhold be the cure to the leasehold problem? The clampdown has been initiated by Javid and by the former housing minister Gavin Barwell, now chief of staff at No 10. It owes very little to civil servants in the

Department for Communities and Local Government (DCLG), and nothing to the Leasehold Advisory Service, a dreadful, compromised quango.

Responsibility for commonhold was moved, unnoticed, from the Ministry of Justice to the DCLG just before the announcement last week. We had been pressing for this for years.

The joke is that more law books were written about commonhold than commonhold housing schemes were built. That may now change.

The new kind of tenure did not take off because it was not compulsory, and leasehold generates so much money for housebuilders.

How, then, did Pickering end up with a little group of flats and houses with commonhold title?

Spire View was built by a New Zealand developer, who probably did not realise he could have made a few hundred thousand on the side by making it leasehold and selling the freehold to one of the investors hungry for these powerful assets.

The scheme went bust in the property crash and ended up in the hands of Royal Bank of Scotland. Hilariously, RBS, which lent on many flaky property assets during the boom — the reason taxpayers still own much of the bank — will not issue mortgages on commonhold title.

Unfamiliarity is probably the explanation, although other lenders are fine with it.

David Robinson, 67, a retired logistics manager, and his wife Teleri, 61, bought their home at Spire View with a mortgage from Yorkshire building society.

“It was difficult to get any information on commonhold title,” he said. “It has worked fine and there is no third-party freeholder trying to make money out of us.”

Soon, many more people in England and Wales will be living in flats. Indeed, the number of flats has doubled since the 1990s. Surely these properties, some of them costing millions of pounds, should have the security of commonhold tenure.

Otherwise, we will keep on creating leasehold tenancies that risk leaving residents at the mercy of unscrupulous and greedy landlords.

Sebastian O’Kelly is trustee of the Leasehold Knowledge Partnership

Having read your article last week (“Homebuyers battle toxic legacy of high-cost leases”, last week), I checked the lease on the Taylor Wimpey-built London flat I purchased two years ago – and found to my horror that it has a “doubling clause”.

Commonhold is back! House builder offers flats without leasehold tenancies