And he wants to know about more leasehold abuses: mark.atherton@thetimes.co.uk 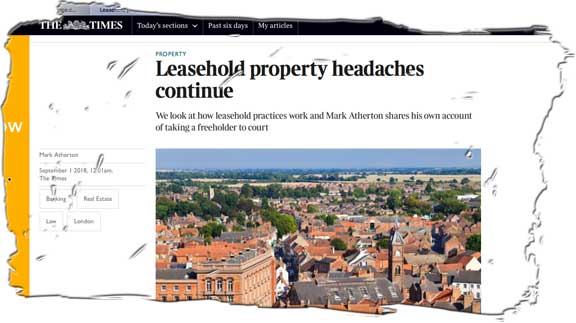 Mark Atherton, the investments editor of The Times, described in the newspaper last week how he defeated MB Freeholds Limited and RMG (the Residential Management Group) over an insurance dispute.

The case came before the Upper Tribunal last November and concerned whether the leaseholders or the freeholder placed the insurance contract for Albion Court in Sutton, south west London, a site of three blocks of 27 flats.

Insurance commissions are a huge revenue earner to speculators in residential freeholds, paying out bumper commissions that are unknowable to leaseholders who are not part of the contract.

This week Barclays Bank reignited the debate about unfair leasehold practices when it refused to lend against a high-profile development in Stratford, east London, because it was concerned about the underleases that Taylor Wimpey, the developer, was selling to prospective buyers.A bill to ta

The practice of padding the insurance is routine in the sector and in a complete reversal of the role that Parliament intended for it, the taxpayer-funded Leasehold Advisory Service hosted a seminar where freeholders were advised how to cheat leaseholders over racked-up insurance costs:

Mr Atherton writes: “The problem began after MB Freeholds acquired the freehold of our building from the original builder.”

FM Freeholds Limited is owned by Mark Hawthornthwaite with Ben Ogunby owing 45 per cent, and it declared net current assets of £134,000 last year.

Mr Hawthornethwaite is also known as Mark Hawthorn, in one of the name gymnastics so widespread in the leasehold sector. Based in Bolton, he is known to leaseholders in the North West, where he owns numerous freeholds to flats and houses.

As Mark Hawthorn, he heads the Landmark Investments Group, which appears to be a one-man band. He wrote about the effects of Brexit on ground rents on LinkedIn:

Brexit and the Ground Rent Market…

Following on from recent events we have had a number of developers and lenders seek our advice on the future ground rent pricing and demand. Ground 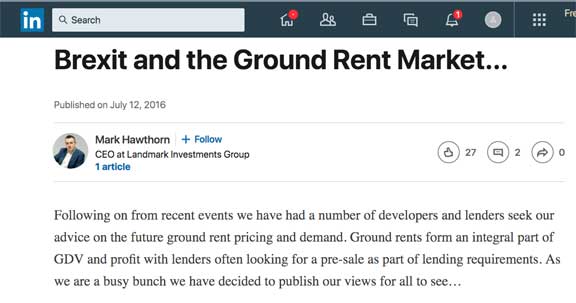 Mr Atherton writes: “We had been insuring our flats for years and the previous freeholder had found nothing wrong with the cover we took out. Yet MB Freeholds found a clause in the small print, which allowed it to take over arranging the insurance on the basis that we were not insuring our flats properly.”

In the first year of MB Freeholds ownership, the insurance cost was only £1,263.

The Upper Tribunal noted: “The cost of the insurance in the year from March 2015 was £6,162, more than a four-fold increase on the previous year, while for the following year the cost was £8,367.”

The rises prompted the leaseholders to go to tribunal, where they were twice defeated. This reduced their number from nine to only three.

“We had already spent £100 [each] and a lot of time and effort on the case and seeking permission to appeal would incur further costs — of close to £1,000 — and time,” Mr Atherton writes.

“Armed with a 200-page document I had spent months preparing, I was up against a barrister and a representative from RMG.

“The case boiled down to two points. First, was MB Freeholds entitled to make use of a proviso in the lease to take over the buildings insurance for our flats if we were not insuring the flats in the joint names of ourselves and the freeholder, as the lease specified? It was.

“And second, did the lease proviso equally require MB Freeholds to do the same if it wanted to take over our insurance?

“After several weeks’ deliberation the judge decided that MB Freeholds should also have insured in joint names and its failure to do so meant that it lost and we won. MB freeholds was given time to appeal, but didn’t.

“All those hours spent sifting through documents and tapping away at my computer had been worth it. MB Freeholds appears to have gambled on the fact that we would not have the motivation, knowhow, or the money, to challenge it in court. It gambled badly.”

The tribunal also ruled that MB Freeholds could not claim its legal costs.

The full ruling is here:

Leaseholders pay up to 60% more for buildings insurance because of secret commissions, reports The Times, Harry Scoffin,

Is the Bank of England pandering to freeholders over punitive lease valuations?
Next Post: 20,000 leaseholders trapped in blocks with Grenfell cladding, says Telegraph