Donate
You are here: Home / Latest News / 18% of leasehold houses paid for with Help To Buy, says FT in devastating attack

And I won’t invest in plc house builders on moral grounds, says columnist

The Daily Mail is not happy either … 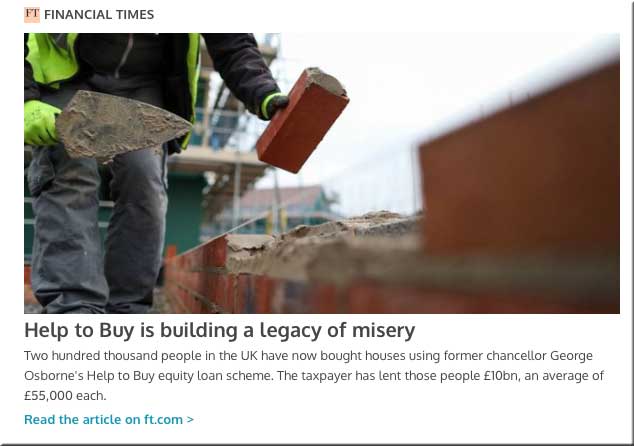 A devastating attack today by Merryn Somerset Webb in the Financial Times on the toxic legacy of Help To Buy which accounted for 18% of leasehold house sales in 2017.

She concludes of our out-of-control plc housebuilders:

Shares in Persimmon tumbled yesterday as the embattled company prepared to install a new chief executive following a damaging row over fat-cat pay. The stock was down 4.7 per cent, or 116p, to 2352p on suggestions the builder could be stripped of its right to participate in the Government’s Help to Buy mortgage scheme.

Ms Somerset Webb describes herself as “a red in tooth and claw” but she would not invest in these house builders on moral grounds.

“Look to Persimmon, developer of some of the meanest looking houses in Britain (don’t take my word for it, go and look on their website). Half of its sales are Help to Buy. Pre-tax profits have just passed £1bn. Operating margins have just hit a record 30.8 per cent. Think about that: this isn’t a company, it’s a state-sponsored taxpayer exploitation machine.

“Still, at least we aren’t alone in being exploited by the sector. The first-time buyers are our fellow patsies. The very existence of Help to Buy forces up house prices in general by creating new demand. But first-time buyers also have to buy new build to get Help to Buy cash. That means that on top of the general price rise, they have to pay the average 16 per cent new-build premium as well as the “just because we can” premium that comes with buying a Help to Buy classified home.

“Then, after five fee-free years, they have to start paying interest on our loans to them — 1.75 per cent for the first year, rising at RPI rather than the lower and supposedly government-preferred inflation measure CPI, plus 1 per cent a year until the loan is paid off. The average APR assumed by the scheme is 5.2 per cent. For context, note that Virgin has a 10-year fixed-rate mortgage on offer at 2.7 per cent.

“The point is that two nasty risks come with the complications of your deal. First, that your initial overpayment leaves you in negative equity on the traditional part of your mortgage (and the taxpayer potentially on the hook for some of the losses by the way). Second, that the value of your house goes up and, just as with the old shared appreciation mortgages of the 1990s, you pay back the loan and then don’t have enough equity to buy again. Miserable.”