The average annual property service charge in Britain is £1,863The service charges for new builds are 96 per cent higher than older properties and average £2,777

The case for selling all new flats with a residents’ management company included in the leases – which would immediately empower all leasehold purchasers – was made stronger by research reported today by the insurer Direct Line for Business.

It revealed that property service charges are rising rapidly with a third (33 per cent) of management companies increasing these fees in the last two years.

The average service charge or fees leaseholders pay to cover their share of the overall building maintenance, now stands at £1,863.

In addition, ground rents are being ramped up as develops seek to embed value into the freehold, which are highly desirable investment assets (and which, of course, have to be offered first to leaseholders, although this legal requirement is easily worked around).

For buy-to-let landlords the service charge costs represent more than two months of the average monthly rental income, which stands at £9,062 annually.

The service charges for new build properties, coming on the market in 2016 are significantly greater than for older dwellings at £2,777.

This is 96 per cent higher than the average for an older property. 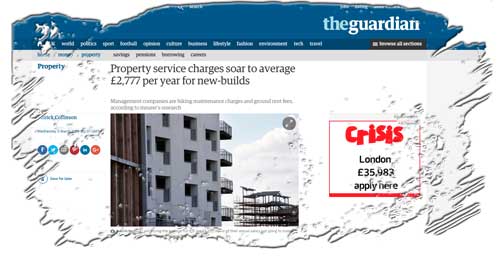 Solicitor Scott McCabe organised the right to manage at Imperial Hall, in Old Street, just north of the City, in order to unburden himself of Sterling Estates Management, which had been imposed on the 49 residents by freeholder Columbia House Properties (No 3).

They then decided to send the freeholder packing, too, through enfranchisement.

“It is amazing what we had to put up with while the former freeholder only had a measily £404,000 of value in our property,” says McCabe, who comes from Australia where English leasehold law does not exist.

“Nearly every flat in this building is worth as much or much more than that. This underlines the scandal of the whole leasehold business in this country.”

Owners of freehold properties situated on private roads or private estates are being charged for upkeep of roads and gardens.

In one example owners of every four-bedroom property situated on a development in Guildford are charged £900 a year for upkeep of the road and communal gardens.

Would-be home buyers would be well advised to tell developers attempting this sort of nonsense to remove these clauses and sources for future dispute immediately.

Persimmon even favours building leasehold houses, which is an astonishing try-on. 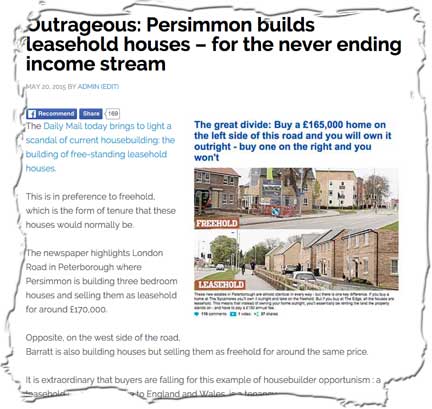 Nick Breton, Head of Direct Line for Business says: “Service charges are often a hidden cost, which should be factored in when considering the affordability of a property.

“In some cases service charges are uncapped [surely almost all cases?] and can escalate rapidly.

The method for calculating service charges also varies between developments.

In some cases it is a flat rate for all properties, while for others it is determined by the number of bedrooms or the square footage of a property.

Service charges usually cover repairs to communal areas of a development such as windows, drainage and the roof. They may also be used to establish a sinking fund for major renovations. In some cases they are also used to pay for shared services such as gardeners, landscapers, concierge services or cleaners.

Burj Khalifa: Pay the service charges, or we will switch off the lifts