Donate
You are here: Home / Latest News / Could freeholder Christopher Moran clean up big time by closing the brothels at Chelsea Cloisters?

Using a flat for “immoral purposes” can be grounds for forfeiture 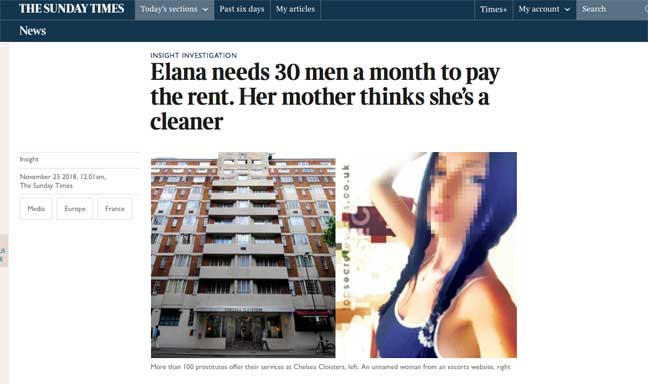 Many have to sell their bodies 30 times a month before they can afford the rents of £3,000 a month at the 670 flat complex.

Many of the prostitutes are from Romania, it is reported.

Theresa May has accepted large donations from a property tycoon who is profiting from an apartment block rife with prostitution in one of the wealthiest areas of London.An investigation by The Sunday Times has established that more than 100 prostitutes are listed on websites as available for busines

Chelsea Cloisters is apparently known to sex punters as “ten floors of whores”, and The Sunday Times managed to make 40 bookings with prostitutes, who occupied 23 flats at the complex.

There is no suggestion that Christopher Moran, 70, knew of the prostitute tenants in his building, or profited from their labour.

On the contrary, the exposure of the scandal by The Sunday Times may well prove a windfall to the freeholder.

Many leases deprecate immoral behaviour in the property of a leaseholder and it is grounds for forfeiture. So, in theory, Mr Moran could forfeit every one of these dingy, small flats from their leaseholder landlords and pocket the proceeds.

A similar case came to LKP’s attention recently in the Grovesnor Estate, also prime central London. An overseas investor rented out a flat worth £1.5 million and it was tenanted by prostitutes, or more likely their pimp.

One leaseholder visited the property after a police raid, which ended the business, and saw the bedroom doors had padlocks on the outside doors – to keep the inmates inside, one assumes.

Elana needs 30 men a month to pay the rent. Her mother thinks she’s a cleaner

The economics of being a prostitute in Chelsea Cloisters are grim. Elana (not her real name and not pictured above) has to sell her body to 30 men each month in order to find enough cash to cover her huge rent bill.

The hope of all the residents is that the freeholder forfeits this property off the investor, who has never been seen in London, and that the property is bought by someone who lives in it.

Prostitution – along with short term visitors through AirB&B – are a nightmare for many owner occupier leaseholders in central London.

Back in 2013, the leaseholder-controlled residents management company at Troy Court in Kensington, introduced a £912 sub-letting fee after a panic over prostitution.

Leaseholder Claire Jenkinson was so incensed by the arbitrary charge that she contacted LKP, and we managed to get it reduced to £360, which she found acceptable.

It is still a very high fee, with no justification under the lease.

At last! A public defence of the leasehold system from an articulate freeholder …

Anonymous freeholders are the reliable long-term custodians of blocks of flats, Select Committee is told
Next Post: Respond NOW to government consultation to reform leasehold