Donate
You are here: Home / News / Have young buyers woken up to the great leasehold hoax? Looks like it … 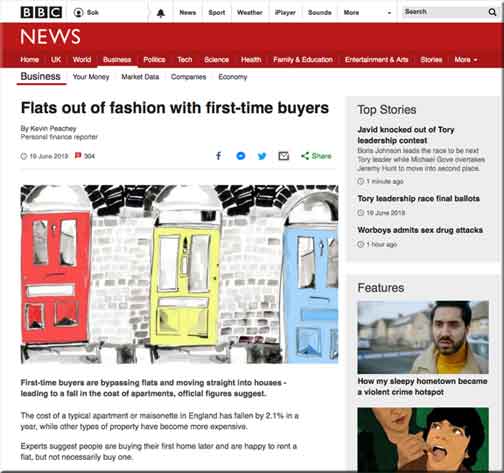 The BBC yesterday reported that first-time buyers are now actively shunning flats across London and the south-east of England.

Flats out of fashion with first-time buyers

First-time buyers are bypassing flats and moving straight into houses – leading to a fall in the cost of apartments, official figures suggest. The cost of a typical apartment or maisonette in England has fallen by 2.1% in a year, while other types of property have become more expensive.

The Telegraph today has also run with the story.

Flats are rapidly losing their value across the country as millennials jump to cash in on houses for their families of the future. It comes as general property prices across England have risen, but the cost of buying a typical apartment or maisonette has dropped by over two percent in a year.

According to newly released Land Registry data, the average cost of an apartment or maisonette has dropped by a staggering 2.1% in a single year.

It is claimed that the collapse of the flats market is happening because “first-time buyers are bypassing flats and moving straight into houses.”

This behaviour has been linked to concerns over property size and the notion that new-build flats are being designed for Buy-to-Let investors. It is thought “nano flats” do not make good long-term homes, places where couples can bring up a family.

A desire of first-time buyers, who are thought to be getting onto the housing ladder at a much older age than their predecessors, to purchase a home which is future-proofed is stressed as the key driver behind this change in consumer behaviour.

Millennials essentially want to live in their first property for a longer period than past generations of first-time buyers did. Richard Donnell, insight director at Zoopla, identifies this as the reason why first-time buyers are looking to “leapfrog” flats.

So is this development a fundamental shift in the housing market, or a temporary Brexit-induced blip?

Are first-time buyers willing to forgo the benefits of flat and city living for the numbing work commute? Is it that consumer homebuyers have realised freeholds, not leaseholds, are the true form of home ownership?

LKP really hopes so. Assuming government caves in to lobbyist pressure over peppercorn ground rents on future leases, the only way the spread of this detested tenure will be stopped is through a boycott of leasehold products. Commonhold has to be demanded by empowered consumers.

First-time buyers are getting a raw deal when they “buy” a leasehold flat, as LKP has long argued.

And there is now a high chance they may never get to the next rung of the housing ladder. They could be trapped in their home, unable to find a buyer for the lease.

Renting the property out may not even be viable as rising service charges can eat into the rental yield while recent tax changes start to bite. As the Financial Times recently noted:

The housing ladder is broken – just ask the Instagrammers

“Hey, Alexa! Find me a news story that illustrates intergenerational tensions over housing.” “OK: ‘Notting Hill homeowners angered by a stream of Instagram influencers posing for selfies outside their front doors’ .” If you missed this story a few weeks ago, type #nottinghill into Instagram.

“The UK housing ladder — that combination of rising wages and modest house-price growth that allowed generations of homeowners to trade up from a flat to a house to a bigger house — is broken.”

In February 2017, chairman Martin Boyd and chief executive Sebastian O’Kelly spoke to Hugh Graham, of The Times, about how leasehold preys on those with the home ownership dream.

Service charges: what you need to know

The boom in luxury flats in London has spawned a trend for hotel-style apartments: all-singing, all-dancing blocks that let you live like the star you know you are, with a 24-hour concierge service, pool, spa, gym, cinema room, library, residents’ lounge, car lift and golf simulator.

First-time buyers are really the most vulnerable group of consumer. They are key to leasehold’s survival.

Boyd said that many developers deliberately minimise the service charge obligation so as to encourage the buyer to go ahead with the transaction:

“The managing agent is normally told, ‘You will set a charge of X amount per square metre.’ That won’t necessarily relate to the actual cost, but to what the developer thinks the consumer is willing to purchase at. So they defer costs going forward.”

O’Kelly highlighted the trend of developers running down the two-year building warranty before flogging the freehold on to an investor. By doing this, the developer artfully loses all responsibility for the site and the snagging problems.

The new landlord who has bought the freehold interest to make money from the ground rent (and service charge if he is unscrupulous) will then most likely crank up the management fees, hitting leaseholders who are living in what is still a very new building.

Despite these dubious business practices and the reported buyer move away from flats, it is clear that there is a way to go before leasehold becomes so toxified that no right-thinking person would ever sign up to be a mortgaged tenant. A recent millennial money column in The Times makes it clear that the iniquitous leasehold system is still very hard to avoid:

Millennial money: The leasehold system is a shambles

“I bought a home because I wanted to be free of the rental trap, and now I’m trapped by a leasehold.”

“I bought a home because I wanted to be free of the rental trap, and now I’m trapped by a leasehold.” These were the words of a mid-30s friend who finally got on the housing ladder last year, only to promptly fall into a dispute with her freeholder.

“Like many millennials, buying a flat was her only option. Like many people she didn’t understand the archaic and restrictive leasehold system.”

But why should young people have this Hobson’s choice? Between leaseholding to enjoy the city they love and freeholding at the cost of being removed from work and the opportunities that city living brings. Who wants to keep paying sky-high rents anyway? At least with leasehold you have a lease you can sell on, defenders of the system say.

With new-build leasehold sales accounting for 44 per cent of all new-build by value between July 2017 and 2018, freeholding is becoming increasingly out of reach for hardworking people.

Speaking to LKP, Annie Shaw, the financial journalist and a former property editor of the Sunday Telegraph, said:

“Leasehold may have had its place in the past in maintaining the integrity of estates or the management of buildings with multiple occupants. However it is clear from developments over the past several years, including the increase in the trading of freeholds as an investment medium, that something has gone badly wrong.

“It is fair to say that like indentured labour and the truck system, leasehold is past its sell-by date in a modern society.”

Young people must be allowed to have access to land capital in the cities.

By building up in these economic hubs, government would relieve pressure on the commuter belt rail services.

There will be a productivity boost as workers will be less tired. They may even be happier, safe in the knowledge that they are bona fide property owners and have full control over how their money is being spent as commonholders. In this context, the freehold house with the garden may lose all appeal …

Exclusive: Commonhold can only work if ground rents are banned, said Ministry of Justice – in 2009!
Next Post: Taylor Wimpey’s Pete Redfern tells FT ‘we got it wrong on ground rents’