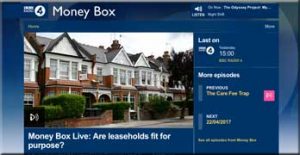 The programme preamble, presented by Louise Cooper, pointed out that in the 1990s 22 per cent of all new builds were leasehold and the figure today is 43 per cent.

It also drew attention to the survey of the Leasehold Advisory Service which found that 57 per cent of leaseholders regretted their purchase.

This was a spectacular own goal from leasehold sector insider Roger Southam, the controversial chairman of LEASE, who commissioned the survey from Brady’s Solicitors, which – like Mr Southam himself – advises freeholders on maximising ground rents.

The participants in the half-hour discussion were Sebastian O’Kelly, trustee of the Leasehold Knowledge Partnership, Andrew Bulmer, of the Institute of Residential Property Management, Paula Higgins, founder of the Home Owners’ Alliance, and Beth Rudolph, of the Conveyancing Association.

The programme began with an interview with Katie Kendrick speaking to the Victoria Derbyshire Show in February.

There was notable unanimity to the first question of why are housebuilders building leasehold homes.

“It is considerably to the advantage of any developer to build a leasehold property, whether a flat or in this case a house.

“Katie was buying a home, but in so doing she was creating an investment asset class that has been sold on to murky and anonymous investors, often based offshore, who are very interested in this as it pays around 7 per cent as a long-term investment vehicle. Unfortunately, leasehold gives these opportunities for investors to hitch a ride on the residential property market. 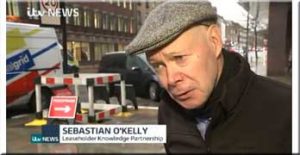 Sebastian O’Kelly: “I doesn’t seem to be when you look at the sales prices that have been asked. Freehold houses sell for the same as leasehold

Beth Rudolph, of the Conveyancing Association, said that she could not justify leasehold houses.

“Is there is a good reason for a property to be leasehold, fair enough,” she replied. “And buy good reason I don’t just mean lining the developers’ pockets. I mean when there is a leisure centre or maybe just a parkland or something like that then there would need to be the ability to get everybody to contribute to the cost of maintaining that.”

Andrew Bulmer, CEO of the Institure of Residential Property Management, said: “I have to say that I find the prospect of leasehold houses really challenging. I don’t think there’s any great need for it, in the main. Sometimes there is a need for it if the land is owned by a trust or a housing authority. But I’m struggling to see why builders would think it’s a good idea, except, it must be said, for the profit motive.”

The BBC quote a statement from the National Federation of Builders, which represents smaller housebuilders, saying that leasehold is “a legitimate model for houses and in some cases preferred. Homeowners find great value and security in the maintenance of the building and common space.”

The more important trade body, the House Builders Federation, which does represent the plc housebuilders, has yet to say a public word on this crisis in its sector.

Paula Higgins, of the Home Owners’ Alliance, was concerned that freeholds “are being sold from underneath owners’ noses”.

Mr O’Kelly said that LKP analysis showed that nearly 40,000 leasehold houses have been sold in the last five years.

“These are the sort of ground rent terms that you’d expect the worst kind of property spivs to dream up after having bought a freehold at an auction,” he said.

“But instead these are ground rents offered by plc housebuilders.

“This is a very serious crisis now because a number of mortgage lenders are refusing to lend to buyers of these properties, so you have got blighted homes.

“And it’s not just be about leasehold houses. There are a considerable number of leasehold flats that have these doubling ground rent terms. We have a lot of evidence now of mortgages being refused on these properties.”

The Conveyancing Association earlier this month accused the Home Owners’ Alliance of “scaremongering” in its report on leasehold after it said it did not amount to real home ownership.

“It cannot be emphasised strongly enough that owning a leasehold is not owning a property.

“It is owning a tenancy.

“Tenancy is the word used throughout the law that applies to this form of property tenure. ‘Home ownership’ is only used by estate agents, developers and other people who have plenty of bad reasons to obfuscate this form of ownership.”

But Mr Bulmer said: “I do think we need to be a little bit careful when we start to use words like ‘rotten system’.

“Leasehold can function well. There are plenty of leases with low rents and responsible landlords and good managing agents.

“If we’re going to point to the 4.2 million leaseholds that are out in the country and say it is all rotten, then we are going to do a disservice to the system where is working well.

“But there are problems with the system and there is no doubt about it that some form of reform is required.

“What is required is that consumers are better informed. Work has been done. New leaflets are available on that. But there is an issue with the estate agents and consumer protection regulations providing more information at the point of sale.”

The final question of BBCX Money Box Live was: Can leasehold play a useful role in our property market?

Paula Higgins said it was time to look again at commonhold.

Beth Rudolph said “the balance has tipped the other way” with doubling ground rents and short leases. “We’ve got commonhold we should be looking at that again.”

Andrew Bulmer said that “leasehold is here to stay”, but “some reform is required. Bad practice needs to be separated out from legitimate leasehold management.”

Sebastian O’Kelly said: “No, end it. It has created this position of vulnerability on the part of the leaseholder, the tenant.

“It should not be this complicated to own flat in England and Wales. Get rid of leasehold.”

Buyers would have ignored ground rent clauses even if we had told them, says conveyancer Rob Hailstone