Donate
You are here: Home / News / Mortgage lenders and conveyancers lay bare the rot of leasehold to MPs

… and MPs says profiteering freeholders will be treated ‘like Philip Green’

… LKP patrons call for another Commons debate on leasehold

Mortgage lenders and conveyancers yesterday told MPs in the All Party Parliamentary Group that leasehold is in desperate need of legislative reform.

The cautious Council of Mortgage Lenders, now renamed UK Finance, spoke of its “disappointment”, acknowledging that ordinary buyers are living in blighted homes.

Nationwide talked of a “legislative” response to the issue of leaseholders trapped in homes owing to onerous lease terms making them unsellable. It underlined why it was not prepared to lend on leaseholds with higher than 0.1 per cent ground rents.

And the Conveyancing Association, deploying data drawn from 21,000 homes sales, listed the numerous imaginative scams freeholders dream up at the end of occupation when a leasehold property is sold.

(They are no less imaginative during the beginning and the middle of the process either, the Leasehold Knowledge Partnership can attest.)

It added up to a dismal picture of leasehold practices. The audience of 80 included MPs and Lords, stakeholders in the leasehold sector, property managers, two Law Commissioners, landlord and tenant lawyers, conveyancing solicitors, trade bodies and leaseholders who have been sold houses and flats with outrageous ground rent terms from developers such as Taylor Wimpey and Countryside Properties plc.

The housebuilders were as usual too shy to attend, with Countryside Properties plc pulling out hours before the meeting.

The meeting was chaired by Martin Boyd, a trustee of LKP.

“The people who have bought these freeholds from developers are in my view going to face a significant amount of parliamentary attention. It will ask how they can buy a freehold for some £5,000 and then within a year or two ask a leaseholder to pay £42,000 to buy the freehold back.

“In my view that is unfair and socially irresponsible. Those people can expect to be treated like Philip Green if they don’t come to reasonable settlement very quickly.”

The meeting was the first of the All Party Parliamentary Group on leasehold and commonhold reform of this Parliament. There now 86 MPs and Lords who have joined up.

All three of LKP patron MPs – Sir Peter Bottomley, Sir Ed Davey and Jim Fitzpatrick from the main political parties – were in attendance.

Sebastian O’Kelly, a trustee of LKP, told the meeting: “It is absolutely ridiculous that in Marie Rimmer’s constituency of St Helens South and Whiston that a modest can be sold by Taylor Wimpey that in 60 years generates £185,000 in ground rents.

“That is just scamming the poor and the vulnerable, and a whole load of professionals have been complicit in this whether the lenders, the surveyors or the conveyancers, who have been doing a tokenistic job and landing these people in the soup.

Housebuilder Bob Bessell says ‘no justification for ground rents at all’

“I would like to draw contrast between those kind of house builders and the gentleman sitting three along on my left: Bob Bessell, the founder of Retirement Securities, who has built 3,500 retirement properties around the country.

“He has left his entire freehold interest in trust for the benefit of his leaseholders.

“He has not scammed anyone. The way he has chosen to run his business stands as a very dramatic contrast to the plc housebuilders who decided to cheat their own customers.”

Council of Mortgage Lenders: ‘disappointed’ with the sector

Jennifer Bourne, of the Council of Mortgage Lenders / UK Finance, was the first quest speaker who told the APPG that there was now a working group looking at mortgages on new build properties.

“Lenders will need to learn how ground rents work and any other charges in a leasehold agreement,” she said.

The CML / UK Finance wants ground rents that won’t affect future mortgageability – ie makes a property unsellable except in cash auctions – and which have a “reasonable lease length”.

Miss Bourne suggested “ground rents should be as close to peppercorn as possible”.

For some unexplained reason, the CML / UK Finance feels it is rational for leasehold flats to have shorter leases than houses. This seems to be a view among lenders, but the reasoning for it is lost on LKP.

“We are very cognisant of the issue that some homes with doubling ground rent may be blighted.

“Lenders like others had not really appreciated what was coming through with these leases. It is disappointing that we are having to look at this.”

Nationwide: We are not lending on new leases that cheat buyers 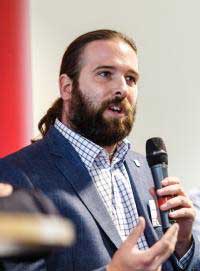 “By the time that you find out that there are onerous terms – it might be that the lease is short; it might be the ground rent is doubling – potentially you are six to nine weeks down the line,” he told the APPG, which was attended by 80 MPs, Lords and stakeholders.

“We made a decision a couple of months ago to draw a line in the sand. Could we continue to allow people to continue to buy leasehold properties where there were onerous terms which would mean in future an asset that was not what the buyers thought it was. Our view was, no.”

“We are seeing instances where ground rents start at £500, £600 or £700 a year, which are completely disproportionate to the value of the property.”

Then there were leasehold consent fees: £10,000 for a conservatory, say, or £5,000 for a satellite dish. All these can affect future value.

Mr Stevens urged that all key lease information should be provided up front clearly.

He urged more consumer awareness of leasehold, particularly concerning ground rents and consent fees, and “truly independent advice when purchasing a property” as “everybody in this process potentially has a vested interest”.

“We need a mechanism to allow customers who currently have properties with onerous leases to purchase the freeholds on a fair basis to ensure that they can go forward.

“We need a legislative response to this.”

Conveyancing Association: Leasehold sellers pay too much and wait too long

A whole raft of dodgy and unjustifiable fees are dreamed up by freeholders and their managers whenever a leasehold property comes up for re-sale, according to the Conveyancing Association.

The frustrations and try-on fees involved in a leasehold transaction were laid bare by Beth Rudolf, the association’s director of delivery.

These delays – far worse than those involved in the conveyancing of often more valuable freehold houses – has an impact on the housing market and the wider economy.

“If people are not moving they are not spending money. They are not booking holidays,” said Miss Rudolf. “They have no idea what is going on in their lives for what looks like four months.”

She gave some compelling examples of leasehold sector game-playing when it comes to the sale of flat or leasehold house.

The First Tier Tribunal has ruled that a deed of covenant should not be charged at more than £80, but it is routinely costed at £300 today.

As with subletting fees – supposedly limited to £40 per tenancy – freehold game-players have successfully ignored the tribunal as irrelevant.

Premier Property Lawyers, a Conveyancing Association member based in Leicester, examined the data of 21,000 leasehold transactions.

On the basis that £100 a hour would be a reasonable fee for a paralegal – £120 in London – 77 per cent of deeds of covenant fees were unreasonable.

“The average fee was £132 across all 21,000 of those data sets, even though the property tribunal says that £80 is reasonable for a deed of covenant,” said Miss Rudolf.

“And since an Act in 1996, you do not need a deed of covenant to impose the benefits and burdens of a lease on anybody so it is a completely otiose and unnecessary document.”

“The charges for 94 per cent of notices of assignment on every single lease transaction were unreasonable, according to the research.

“Stock transfer forms, were found in 72 per cent of cases to come with unreasonable fees.

“So we can see that these unreasonable fees are endemic across this.

“We see increases regularly: over the last four years they have gone up by 23 per cent in some cases.”

“You must be getting a pretty spiffy service, you would have thought. Sadly not, the unreasonable delays continue to increase.

“In 2014, 40 per cent of the leasehold sales packs necessary to sell a property took over 30 days to come back after payment had been made.

“When you consider how many withdrawals and fall-throughs you get the longer a transaction goes on, the impact is serious.”

It is going to cost me thousands to get my Taylor Wimpey freehold that was promised for only £4,425

Finally, Joanne Darbyshire, a Taylor Wimpey purchaser of a leasehold house with doubling ground rent in Bolton, gave the APPG insight into progress on her case.

She was told that she could buy her freehold after purchase and knew from her neighbour who did so that the cost would be around £4,425.

“I was miss-sold my property on the basis that I could buy the freehold to my house for a similar price in the future.

“I’m now going through the enfranchisement process and I do not know whether Taylor Wimpey’s supposedly £130 million Ground Rent Assistance Scheme will be of any help to me.

“I’m still going to lose thousands of pounds paying for this freehold, which I wouldn’t have been had I been properly advised at point of sale.

Marie Rimmer MP: how can a modest Taylor Wimpey leasehold house in St Helens pay out £185,850 to freehold investors over 60 years?
Next Post: BBC R4 You and Yours features £36,000 car crash leasehold defiance over Southwark major works scheme