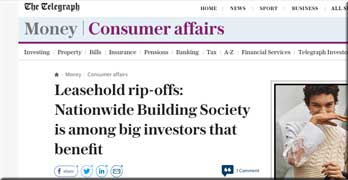 The Daily Telegraph and the Daily Mail today criticised Nationwide for investing in ground rents after refusing to lend against leasehold properties with onerous terms last week.

The Telegraph refers to a spokesman declining to reveal what proportion of the Nationwide’s investments were escalating ground rents. Nationwide said only that the “vast majority” of the fund’s holdings complied with the new policy.

The newspaper claimed that the Nationwide position was “reminiscent of the embarrassing revelation” in 2013 that the Church of England had exposure in the payday lender Wonga.

The article can be read here

The Daily Mail pointed out that the Nationwide’s final salary scheme closed to new staff in 2007 and that it set aside £136million to compensate victims of PPI mis-selling and other banking mistakes. 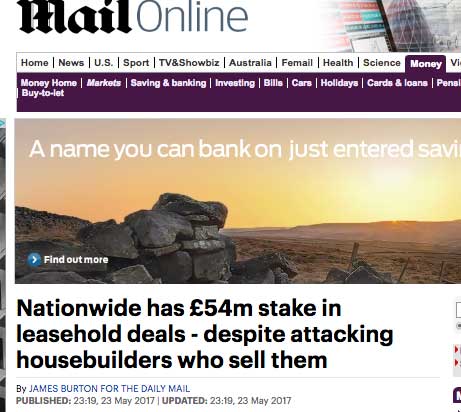 The Daily Telegraph article also referenced the John Lewis Partnership Pension Trust that has been buying up freeholds where the ground rents double.

The freeholds are managed by Estates and Management, the admin branch of the Tchenguiz interests in residential property. These are ultimately controlled by the so-called Tchenguiz Family Trust, based in the British Virgin Islands.

The organisation of this group has been described as “quasi Biblical” in complexity by a property tribunal judge.

The Leasehold Knowledge Partnership was referenced in the article in connection with the John Lewis Partnership Pension Trust, but made no critical comment about Nationwide.

Sebastian O’Kelly, trustee, was quoted saying ground rents were “one of many scams in leasehold tenure”, adding:

“With its high ethical standards, John Lewis should not be investing in ground rent assets which have contributed to so much misery for the unfortunate first time buyers who bought leasehold properties.

“Unfair Britain has never been in such stark relief as over this scandal.”

However, LKP has not criticised Nationwide. Plenty of charities and mutuals invest in ground rents in pension funds, and some are very controversial.

What distinguishes the John Lewis Partnership Pension Trust is that it has been buying up freeholds to leasehold houses where the ground rent doubles.

Asked specifically about Nationwide, Sebastian O’Kelly gave the following comment, which was not published:

“Ground rents are not justified, but they are legal and many pension funds own them.

“Nationwide has done the entire housing market a favour by refusal to lend against leases with the most predatory terms.

“It has certainly done more to clean up the leasehold sector than civil servants and assorted quango hangers-on.

“Cheating leaseholders in this way is now beyond the pale, and it has taken a lender to say it.

“Ordinary people are buying homes; developers and their clever advisors have transformed them into complicated financial instruments to enrich investors.”