Sebastian O’Kelly, of LKP, said in an interview: “We are told that residential freeholds are bought by pension funds and that it pays for your and my pensions.

“Absolute rubbish. Many of the them have been sold to shady companies where the ownership is hidden by nominee directors, or they are owned offshore.

“It is this speculative element that has got to end in British property.”

The programme was a long preview of the Housing White Paper and followed an excellent, thorough report on the Victoria Derbyshire show considering leasehold generally last week at 14:56 and 01:07:20.

It included an interview with Clair Scott, owner of a Taylor Wimpey leasehold house in Silver Birch Close, in Bolton, which has doubling ground rents every ten years which started at £295.

Ms Scott and her partner had been trying to sell her property, but the sale fell through.

“The sale was going really well,” she told Victoria Derbyshire. “But then it fell through at the last minute because the buyer’s solicitors came across the ground rent clause.

“The solicitors told the buyers that our house was not sellable because the ground rent terms were too onerous.

“We have inquired about purchasing the freehold from an entity but we don’t really know who is behind it – we don’t know who owns our freehold.

“Either way you look at it we have lost 25% of the value of our house.”

The position is even worse for Clair as she is heavily pregnant and she and her partner have completed the purchase of another house.

“So we are financially crippled and riddled with worry.” 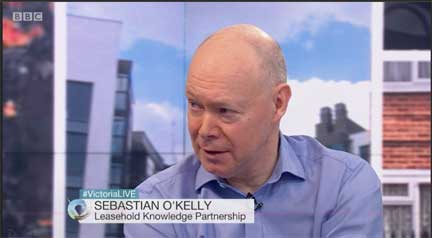 Mr O’Kelly agreed with Victoria Derbyshire that the situation was scandalous.

“It is a complete scandal. And the pity of it is that this is plc housebuilders which are misselling these leasehold houses. A total of 8,775 were sold in 2015.

“Hapless first time buyers are coming off assured short-term tenancies and buying these houses only to find there are these onerous ground rent terms that completely devalue the property.

“The Help To Buy scheme, where taxpayers are underwriting people’s mortgages, could be used to end these flawed, predatory products.”

Affluent London leaseholders are just as likely to be kicked around as poor ones, finds the Sunday Times
Next Post: DCLG rejects complaint over LEASE chair Roger Southam, who pledged to ‘maximise ground rent opportunities’ for freeholders